Inside: Permission to fail builds strength and courage and helps us experience life through the lens of curiosity and joy rather than fear. This post is partially excerpted from 12 Tiny Things: Simple Ways to Live a More Intentional Life and includes referral links.

“The one who falls and gets up is stronger than the one who never tried. Do not fear failure but rather fear not trying.”  ―Roy T. Bennett, The Light in the Heart

You’ve probably heard the term “resilience” before: It’s an important concept and skill to develop as a human being. When we get curious, there’s plenty of potential for learning, but there’s plenty of potential for falling down as well. We hone our resiliency skills when we get back up after falling, even if it means we fall seven times. As long as we get up eight, we grow. When we can muster up the courage to try the things that build a sense of resilience we cultivate the kind of thinking that encourages self-efficacy, we open our minds to learning, and we become more capable of living the life we want to live.

Resiliency is defined as the capacity to recover quickly from difficulties; toughness. It’s also defined as the ability of a substance to spring back into shape. As human beings, we all have the capacity to develop that ability to spring back into shape, or even shift our shape as we add layers of knowledge, experience, and all the other stuff of life. We have the choice every day to take whatever risks are necessary to open ourselves to learning, even though sometimes those choices result in things not going right. When we spring back after feeling deflated, and when we get up after a fall, we have enhanced our original make-up and given it one more layer of depth. We have grown, expanded, and evolved. We have deepened our roots.

Resilience is not a fixed personality trait. It’s a lifelong project. —Sheryl Sandberg. Learn more in the Rooted and Resilient Mini-Course.

I sit down at my assigned pottery wheel and stare at it, unsure of how to turn it on. It doesn’t look like the wheel I used almost 20 years ago in the beginner’s pottery class I took my first year of college — those were enormous kick wheels, and this electric one seems tiny and unfamiliar in comparison. Glancing to my left, I see a woman with a long gray braid glazing a gorgeous two-foot-tall vase, and to my right, a teenager is just finishing a plate that looks like it came out of a Pottery Barn catalogue.

It’s been too long since I tried this
I am way too old to try to learn anything new.
I don’t know what I’m doing.
Everyone else here is basically a professional.
Throwing on a wheel is actually not anything like riding a bike.
There’s no way I can learn to be a potter.
I will probably fail if I try.
Why bother?

After fifteen minutes of listening to my inner gremlins and fiddling with my block of clay and tools (and locating the on switch), I muster up the courage to put a small round lump on the wheel. I dip my fingers in my water bowl, turn on the wheel and let my hands find the spinning mass of red clay. I don’t get my hands wet enough, and they stick, causing the clay to nearly fly off the wheel. Fumbling with the pedal that controls the speed of the rotation, I feel my face turning red. I glance furtively at the others in the studio. Everybody’s focused on their own projects. Whew. I don’t make eye contact with anyone and go back to my lump of clay. Dipping my hands in the water again, I push the pedal down just a little bit and watch it start to spin. Nothing is at risk of being airborne this time, but I can’t get the clay to center properly. This frustrating process continues for the rest of the two hours I’m there. I leave feeling defeated.

RELATED: 5 Habits to Help You Show Up Strong When You Must Begin Again

We All Fall: Knowing How to Get Back Up is a Life Skill

I remember watching my daughter run across the grass by the garden at full speed one summer day when she was 3 or 4 years old. She was wearing a bright yellow princess-style ball gown and carrying a bunch of wildflowers she’d just picked in the hayfield. I wanted to yell “slow down!” and “hold up your dress!” because there was a hole in the lawn that she could step in. She hadn’t quite figured out running yet, and she had a tendency to step on the hems of long dresses. I didn’t want her to fall. I managed to refrain from yelling, and as I continued to watch, she stepped right in the hole and fell hard to the ground. I started toward her, but she was up again before I made it very far. I could tell she was frustrated and angry, but she reclaimed her bouquet and kept ongoing.

She tripped in that same hole countless times. But one day, she slowed down when she approached the hole and hopped over. She didn’t let all those times she tripped stop her from doing what she wanted to do, despite the frustration that came with all of the falls. She’s better equipped now than if I had commanded her to walk instead. Knowing how to get up again is an important life skill to learn.

We Learn So Much From Simply Risking or Trying

On the last day the pottery studio was open for the semester, I stopped in to collect my projects. Something kept me going back week after week, even though I often felt like I’d never learn the techniques that I needed to be successful. There on the “finished” rack waiting to be picked up after a final firing were two slightly misshapen bowls, one odd-looking vase, and some small vessels that didn’t quite turn the color I thought they would after putting on the final layer of glaze. There was also a tiny black mug with a delicate handle and some hand-carved designs- the last thing I made during the course- that turned out really well. It still sits on my kitchen counter holding sea salt.

Over the course of my eight-week self-directed course in pottery, I had plenty of failures to claim as my own, but I had a few successes to celebrate as well. I took the risk to show up and try something new. It was embarrassing, scary and frustrating. That’s how learning is – sometimes it flows and things come easy, but more often we stumble, make mistakes, and feel like the new knowledge or skill that we want is just never going to stick.

Can I call myself a master potter? Not even close – that would take several more months (or years) of practice and persistence. But I learned that I can do unfamiliar and hard things, and I grew as a result of trying when I could have given up. I remembered how good it feels to figure out how to do something, even if it doesn’t turn out perfectly or if it takes a bunch of flops before finding out what works. I learned that I like the feel of making something tangible, the community that tends to come together around art, and how to not let my projections of what other people might think dictate what I will allow myself to try.

So often the failures that lace a learning experience are like stepping stones on the path to figuring something out. Just like a potter’s glaze, they add another layer to what makes it beautiful to be a human, even if the end result is different from what we thought it should be.

If we say yes to life – to all of it – we cannot bypass the messy, soul-stretching work that asks us to get our hands and feet dirty as we practice new ways of showing up. It takes courage to become who you really are.

Failure is scary. Learning new things takes courage. It often doesn’t come easy. It isn’t fun to have to start over or pick ourselves up after something doesn’t work. Sometimes even when we try really hard, nothing goes right or we just can’t seem to ‘get it’. Sometimes it feels like we fall again and again and again. But despite this fragility and potential for messing things up, what I have gleaned from watching little kids move through their days and from some of my own experiences with failing, is that life is best experienced through the lens of curiosity and joy, rather than one shadowed with fear and worry that I’ll never be good enough at something to keep trying.

We all have weaknesses that we want to protect — but we also all have the capacity to build resilience. Just like a tree growing around an obstruction, we have the capacity to learn from our mistakes and grow in a new way as a result. No matter how old we are, we need to assess risk, weigh the pros and cons of a new experiment, exercise caution, and change direction if we run into a dead end.

What we don’t need is to live in the shadow of fear of what might happen if we fail at something. What we don’t need is to give up our curiosity to perfectionism. When we can allow ourselves the freedom to fall down so we can get back up again and thrive, we keep learning and deepening our roots in ways that nourish our branches.

About the author: Heidi Barr lives in Minnesota with her husband and daughter where they tend a large vegetable garden, explore nature and do their best to live simply. As a wellness coach, writer, and co-founder of 12 Tiny Things, she is committed to cultivating ways of being that are life-giving and sustainable for people, communities and the planet. Her next book, 12 Tiny Things: Simple Ways to Live a More Intentional Life (co-authored with Ellie Roscher) is due out in January 2021. 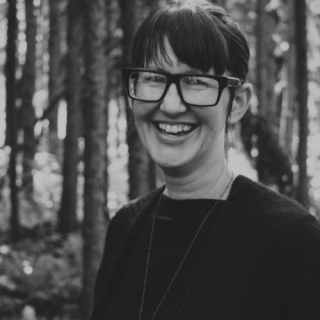 Welcome to my corner of the noisy internet. As a Joyful Living Educator, stubborn questioner, hopeful reformer, and a highly sensitive human in a messy world, my motto is: You're imperfect. Life is messy. Show up anyway. I'll help you figure out how. xo

Read our privacy policy here
BEFORE YOU GO!
LIVE IMPERFECTLY - ON PURPOSE
SIGN UP BELOW: Ease your anxiety with my Brain Download Worksheet. Plus wisdom, study, and hard-won experience shaken together and thoughtfully shared to your inbox Monday mornings to help you show up fully to life in every season.
I look forward to connecting. xo

Powered by Convert Plus
Live Imperfectly. On Purpose.q
201shares